The flowers’ game by Villa Carlotta is an educational card game, designed for the whole family, it is suitable for children from 5 years upwards.

It is a tribute to the beauty of the museum and botanical garden of the famous villa on Lake Como.

The flowers are lovely! In fact, who does not let themselves be captured by the shades of colors, shades and scents of a flower garden?

How many, however, could recognize those flowers that so enchant them? And how many would know how to correctly answer the questions of the little ones: “And what is this flower? What’s his name? “

No fear! From the selection of 18 flowers and plants that are found in the splendid botanical garden of Villa Carlotta, from those most common to some that are found only there, this card game is born that will help young and old to recognize flowers and memorize their names.

The 18 flowers designed, of which the scientific name is mentioned in Latin, Italian and English, are watercolor paintings by Carlo Martinelli on a soft pastel pink background that make the cards of the game Villa Carlotta Flowers’ game refined and pleasant.

In this fun and educational game dedicated to the flowers of Villa Carlotta, the rules are as simple as they are engaging: players must find pairs of flowers trying not to fish for the annoying nettle.

Deal the cards face down to the players. Each player checks if he has pairs of the same flower and he removes the pairs. The youngest player then offers his hand, spread out face down, to the player on his left, who draws one card from it. This player discards any pair that may have been formed by the drawn card. He then offers his own hand to the player on his left. Play proceeds until all the cards have been paired except one, the Urtica dioica, and the player who has the card has to make a small penance.

Villa Carlotta – Flowers’ game  is an excellent souvenir for those visiting the museum and the botanical garden, but it is also an original invitation to discover Villa Carlotta and the world of flowers on Lake Como. 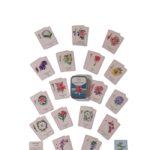 Villa Carlotta flowers’ game
12,00€
This website uses different cookies to improve the user experience, including:
Cookies functional to navigation;
Statistical type cookies (performance cookies) personal data collected during browsing.
To view the information and how to disable cookies Read More
By clicking on" I agree "all specific cookies will be activated in the Extended Information pursuant to articles 13 and 14 EU Reg. 2016/679.

Any cookies that may not be particularly necessary for the website to function and is used specifically to collect user personal data via analytics, ads, other embedded contents are termed as non-necessary cookies. It is mandatory to procure user consent prior to running these cookies on your website.